I'm currently enthralled by Top Chef episodes....I really love watching shows about food and imagining how the dishes taste. Last night I ate a whole lobster and it was delicious. And then a few days before that I had some spicy buffalo wings....Lord, those were sooooo good!!! I've discovered that if I'm craving a certain food, I can eat the whole plate with no problem but if I'm not really feeling it, I can eat a couple of forkfuls.

Lots has been going on in our neck of the woods even though it's been just the two of us. We've been hiding out since the beginning of our pregnancy, waiting for the right time to tell friends and family. We're a little paranoid, given our history, so we wanted to wait until we were safely ensconced in the 2nd trimester before spilling the beans. We're like in our 4th month now. My due date is between July 22-25, 2014. I'm pretty confused about the whole thing because they go by the baby's measurement and I'm going by my LMP because it makes me feel like I've gotten further along. Next month, on EH's birthday, is when we'll be telling friends and family.

We're meeting up with some friends from our old church next weekend for dinner and fellowship which prompted a trip to the mall to buy something that would hide my new, ahem, girth. I'm really looking forward to being with people other than EH but anxious about hiding the bump...which is really bloat that looks like a bump. I also hate lying...even if by omission. How do I explain the weight gain....my gigantic tatas...and round, cone-shaped stomach? I dunno.  And these are women that have had babies so it's not like they don't know what a pregnant woman looks like. God bless EH because he trekked with me to the big girl store that I love at the mall so that I can find something sufficiently camouflaging. Now I'm worried that I'll get bigger by the time dinner rolls around and it will have all been for naught. I may have to get myself one of those belly wrap things just to calm things down a bit.  But the top is super cute....

While we were out looking for camouflage I bought two pairs of maternity jeans which were on sale (score!) at Old Navy. They feel so lovely and soft. I wish I could wear maternity pants all the time. I still haven't bought many maternity tops. I probably won't be hitting up the usual suspects, like motherhood maternity, etc. because I just don't think it's necessary.  I'd rather just hit up the plus size section at Conway, a discount store here in NY, so I can get some flowy things that can be belted if necessary.

EH took the week off from work so we've been hanging out and having a good time. He doesn't do this often because every time he does, his staff acts the fool, and he ends up having to check in anyway. I surprised him with tickets to see the Knicks at Madison Square Garden this past Monday and it was a great gift. He kept looking at the tickets and rubbing them fondly when I brought them out Sunday night. The actual game was great. He got to yell and scream at the players and our seats weren't bad for the price.

Now, I'm not that big of a sports fan. Although I've been watching a lot of football and basketball lately because EH has been hoggin' the TV a lot these days. He's a little OCD and tends to fixate on things for periods of time and then he discards them for a new interest. Right now he's fixated on sports and sports talk radio, which he wasn't nearly as interested in when we first met. So, of course, with my luck the game drifted into double overtime and I hadn't had my nap that day so, yeah, I was miserable and tired and hungry. But I sucked it up and took one for the team! It was a great night and it was so nice to see EH so happy :-) His only complaint was that the cheerleaders were a) too skinny and b) didn't dance......- _____  -......this from a man who said Beyonce was looking real "loose" when we watched the Drunk in Love video, which I love by the way.

A couple of days ago we went for our NT scan at the Perinatologist and got new pictures of "the Whelp" or "Whelpie", formerly known as "Fish." We were calling the baby "Fish" and then EH started calling it the Whelp and it stuck. We were both reading the Game of Thrones books a while ago and we loved the way children were referred to as whelps....but I digress.


Speaking of Whelpie, we've decided that we're going to find out if the baby is a boy or girl. We figure we've waited this long to have a viable baby, why keep ourselves in that much suspense?? I feel totally weird about posting these pictures because my crazy mind thinks I'll jinx it but I took a deep breath and did it anyway! My best friend keeps telling me I have to celebrate the little things and I'm taking her advice.

Posted by MrsPerfectlyImperfect at 3:25 PM 2 comments:

EH and I are anxiously awaiting our 13 week ultrasound early next week and I think I'm actually starting to believe this pregnancy is real. I'm still having my uncomfortable symptoms. Nausea still kicks in for me as soon as the sun goes down. My stomach has shrunk, or something like it, because I can only eat about a fistful of food at a time. This doesn't make me happy because I gets HUNGRY!!! and HANGRY!!
I don't need as many naps during the day but I usually don't leave the bed in the morning till about 11am. I feel really bad about that for some reason....

In other news....It was a balmy 32 degrees in NY yesterday so I ventured out to the local TJ Maxx to pick up some things. I picked up a bathmat for our shower, some hand soap (EH gets very excited about hand soap... is that weird??), a marked down down alternative comforter (something I've been wanting for ages but have been too cheap to buy) and new toothbrushes (I always buy new toothbrushes after we've been sick).

While I was browsing the aisles I came across some cloth napkins that I thought would make great pillow covers. They are standard size ,12 x 12. I loved the gold/mustard color (which of course doesn't come across well in this picture) which goes great with my icky brown couch. I got basic beige contrasting colors to balance it out.

So last night, while I still had the energy and motivation, I got out my needle and thread and stitched up some pillow covers--all the while wishing I had a sewing machine! Maybe someday soon.

I lay two napkins on top of each other and stitched up three sides, leaving one side open to stuff in my pillow. Napkins make great pillow covers because they're washable, removable and already hemmed. This is the finished product. I love it!! 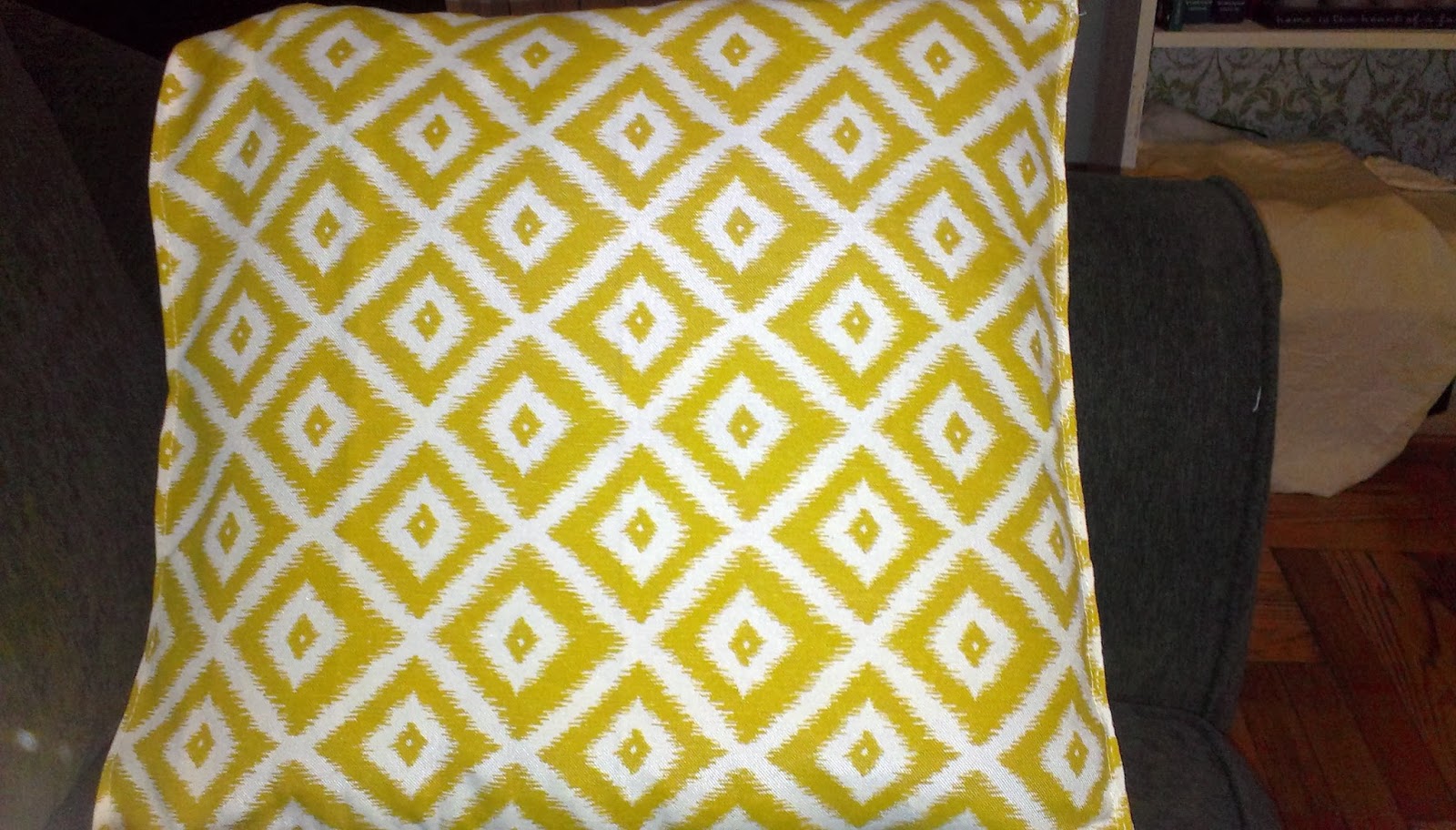 I may end up sewing on some buttons along the side to close it up a bit but I'm not in a rush so who knows when I'll get to that.

I'm getting an attack of the queasies so I'm off to stuff my face with a fistful of food.
Posted by MrsPerfectlyImperfect at 2:18 PM 2 comments:

It feels so good to rejoin the land of the living. EH brought home some sort of flu/cold hybrid situation into the house a couple of days before New Year's so we both spent the days leading up to 2014 as sick as dogs. It was truly, truly horrible. We didn't even get to smooch at midnight because we were both pretty much passed out. For us, the worst of it lasted only three days and we owe that to copious amounts of Vitamin D and C, chicken soup and SLEEP.

I broke down and sent EH out to get me some doctor approved cold medicine and vacillated all night on whether or not I should take it. I was terrified I was gonna cause some irreversible damage to Fish but in the end I only ended up taking it once and that dose ended being good enough for me. I was a mess all the days I was sick. I was convinced I was gonna cough and dislodge the baby. I know it sounds absolutely ridiculous but these are the thoughts of a woman whose never ever made it this far...I'll be 12 weeks next Tuesday.

When I was feeling a little better I called my Ob/Gyn's office, which I'm still considering switching from, to get a prescription for more of my progesterone supplement. What I thought should have been a simple exercise turned into verbal sparring with my Ob/Gyn, WHO I HAVEN'T EVEN MET YET, over the necessity of the medication. This led to her having consultations with my RE and my Perinatologist before I finally got the prescription.

I can imagine that conversation:  "Oh yeah her. Yeah, she's totally irrational. Really believes that staying on the medication is gonna prevent another miscarriage. Yep. Well, she's a little nutty but it can't hurt so just give it to her."

I realized a very important thing during that whole conversation. I'm perfectly OK with being perceived as the crazy lady who wants to stay on the Crinone a little longer, who wants to come to the office every two weeks instead of every month, who argues with the doctor. Perfectly OK!

I'm not a big fan of the New Year's hullabaloo myself but I do like the idea of setting your intentions for the year. At this point I only have three intentions for 2014: 1) have a healthy baby 2) get that damn social work license already 3) continue to value experiences over things and 4) grow in my marriage and faith.

I wish success, joy, love and WARMTH for you as we enter the New Year!!

Posted by MrsPerfectlyImperfect at 9:23 PM No comments: 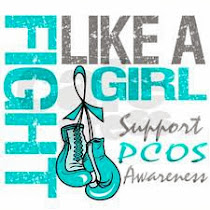 Who I Roll With..